How Can I Choose The Right PCI Express Card? | Here’s What To Look For

Blue-Reed, LLC > Blog > Uncategorized > How Can I Choose The Right PCI Express Card? | Here’s What To Look For 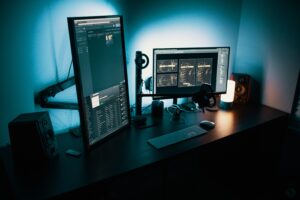 What is a PCI Express Card?

The PCIe (peripheral component interconnect express) is a standard style of connection used for high-speed components. PC motherboards have a number of PCIe slots for adding GPU (video cards), RAID, Wi-Fi, or SSD (solid-state drive) cards. Depending on the motherboard you purchase,  PCIe slots vary.

PCIe slots have a number of different physical configurations: x1, x4, x8, x16, x32. Following the x is the number of lanes (how data travels to and from the PCIe card) that are present in that PCIe slot. One bit can be moved per cycle in a PCIe x1 slot, which has one lane. PCIe x2 slots have two lanes and can transfer data at two bits per cycle (and so on). While the x32 card does exist, they are the rarest of the bunch.

The best practice is to match cards and slots to identical sizes. Mixing and matching do work, but productivity is bound to decrease. You can, for example, insert a PCIe x1 card into a PCIe x16 slot, but that card will receive less bandwidth. In a similar way, a PCIe x8 card can be installed in a PCIe x4 slot, but it won’t have the same bandwidth as if it were in a PCIe x8 slot. For GPUs to operate at their best, a PCIe x16 slot is required.

Which PCIe expansion card will give you the best performance? The lowest generation of PCIe cards will be used. So if you put a PCIe 2.0 card in a PCIe 3.0 slot, you’ll get PCIe 2.0 performance. Even if you flip the scenario to be a 3.0 card in a 2.0 slot, the slot was not designed to handle the newer cards’ bandwidth, so it will still run like a 2.0.

PCIe 4.0 launched in 2017 and offers 64 GBps of bandwidth. Although it is available for enterprise-grade servers, it only just became usable with SSDs in 2019. AMD Ryzen 3000-series CPUs, which debuted in July 2019, were the first CPUs to support PCIe 4.0 x16 out of the box. New motherboards with the X570 chipset are required for full support.

May 2019 marked the release of the official PCIe 5.0 standard. This standard will provide 128 GB/s of bandwidth. As well as being backward compatible with previous PCIe generations, the new specification includes electrical changes to make the signals more reliable, as well as backward-compatible CEM connectors for add-in cards. In 2022, the first PCIe 5.0 devices should be available for enterprise customers, and consumer products will follow after.

PCI-SIG, which defines PCIe standards, expects PCIe 4.0 and PCIe 5.0 to coexist for a while, with PCIe 5.0 used for high-performance requirements like GPUs for AI workloads and networking applications. This means that PCIe 5.0 will be used mostly in data center, networking, and high-performance computing (HPC) enterprise environments, while PCIe 4.0 will be fine for applications that are less demanding, like those on desktop PCs.

How to Choose a PCI Express Card

In order to use a PCI Express card, your computer must have at least one PCI Express slot. It is best to look for PCIe cards if you are installing a wired network without purchasing a designed system. When choosing a PCIe card, it is important to consider the following factors:

Verify that the PCI Express card type is compatible with your equipment and network environment.

Before buying, it is important to know whether the card supports the protocols you need such as RDMA, RoCE, iSCSI, and FCoE.

The most popular controllers are those made by Intel, Broadcom, Mellanox, and Realtek.

After nailing down these three factors, you should consider other factors like transmission speed, port number, connector type, operating system, brand, and price. In the end, it all comes down to choosing what best suits your needs and budget.