Have you ever seen colored glass grids on a sidewalk when walking along a city street? Despite their lovely appearance, the patterns did serve a purpose – or at least they did at one point. The glass pieces are vault lights sidewalk, also known as pavement lights in the UK. They were inserted in the sidewalk to allow light into the basement below.

Many of the glass pieces were clear when the lights were first installed. When the older glass was made, chemists mixed manganese dioxide during the process. This would stabilize the glass and eliminate the greenish tint it got from other elements.

According to KQED, manganese turns purple or even pinkish over time as it is exposed to ultraviolet rays. Currently, colored glass is either very old or dyed to resemble old glass.

Electricity became more common and cheaper in the 1930s, which diminished the use of vault lights. Due to the cracks in the glass, it created hazards for pedestrians as well as subterranean spaces below. As a result, cities began to cover or remove them.

Some preservation groups, however, are seeking to restore the lights for their historic and aesthetic value. Several cities offer tours of vault lights and have studied their history and value. 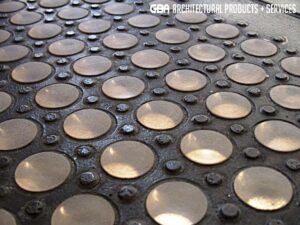 Usually, the tops of the vault lights are flat with the sidewalk, which allows people to walk right over them, but the bottoms often have a different shape.

The bottom of the glass block sidewalk lights has a prism design to spread as much light as possible across large areas. Instead of flat glass, prisms were used to diffuse the light evenly over a large area; flat glass would simply form a bright spot on the floor below, not providing much illumination.

The idea originated as deck lights in the 1840s. On ships, they were used to provide light below decks, especially when an open flame might be hazardous, such as on colliers. There are still deck lights made today, but few of the originals remain.

In the late 19th century, they were common in the larger downtowns, particularly in New York. As electric light became cheaper and better, their use declined, and by the 1930s they were on their way out.  Today, designers and architects are trying to restore this old aesthetic.

An Early Solution to Sustainability

The primary purpose of vault lights (pavement lights) was to provide illumination to areas that cannot be lighted naturally, but their introduction was likely an attempt at sustainability and energy conservation.

Despite the absence of electricity in the mid-nineteenth century, building owners were able to light rooms using gas, oil, and candles. Furthermore, in keeping with sustainable activity, the air within those enclosed spaces would be far purer without the smoke-producing light sources of the past. Even when electric lighting became common, vault lighting continued to provide illumination during the day.

The Resurgence of Vault Lights, But Not How You’d Think…

Original vault lights are being restored and reimagined in a variety of ways by architects and designers as a re-emerging historic American architectural feature. By applying innovation in design and technology, architects and designers can reimagine vault lights beyond the traditional sidewalk application to include skylights, deck lights, stair treads, risers, landings, and bridges.

The Look and Feel of Vault Lights Sidewalk

Concrete and cast iron composite panels offer designers and architects another way to achieve a historic aesthetic without adding weight or difficulty to the installation process. Designed to resemble traditional vault lights, these decorative panels can be used both inside and outside. Panels made of composite concrete and cast iron can be custom fabricated to meet any specifications or complement any design. Panels can be installed overhead or vertically for any decorative purpose.

Composite cast iron panels are made in the United States from environmentally friendly materials. Choose from a variety of surface finishes and colors for a completely customized look that meets your requirements. The panels can be backlit to enhance any space.

If you’re a business owner looking to spice up your space with a traditional and classy feature, consider acquiring some vault lights sidewalk. Not only will it give your space some unique flair, but it can also improve the sustainability, and keep a disappearing piece of history intact.